How did the AAW Wildcats come to be?

That may not sound like a revolutionary idea. But Guay is a teacher at Arts Academy in the Woods in Fraser – a school that has traditionally not had much of a focus on sports.

Even cooler is the fact that there was a lot of interest from students. In fact, there were ten students with some serious hoop dreams.

As it turned out, those students wanted to take Guay’s idea one step further. They proposed an organized team that would compete against other schools.

After about 10 students came together, what was a concept turned into reality.

Fast forward to today and, along with parent-volunteer Aaron Stokes, Guay is now the co-coach of the AAW Wildcats.

Athletic Director Craig Campbell was also instrumental in planning, organizing, and getting the team started. In addition, he’s been key in scheduling games – which without a conference is no easy feat!

“This is like kind of the birth of a new era for basketball,” Guay said. “I believe it’s the first basketball program that we’ve actually ever had.”

In one of our previous blogs, we addressed how tough it is being an artistic teenager in a sports-obsessed world. Especially in more conventional middle and high schools.

This was in no way implying that we have an issue with sports. Being artistic and athletically inclined are not mutually exclusive.

In fact, playing sports when you WANT to has great benefits.

Being part of a team requires you to collaborate with other team members in order to deliver your A-game.

Gaining these teamwork skills helps in the school setting too. Students need to work collaboratively with other students on projects – as well as with instructors.

Finally, when it comes time to enter the job world, knowing how to be a team player can be tremendously valuable.

There’s no arguing that emotions can run pretty high in sports.

Playing in sports helps students learn how to control their emotions so it doesn’t affect their performance in the game.

One of the cool things about playing competitive team sports is the opportunity to interact with students from other schools.

Team players learn important social and communication skills through sports. It fosters a sense of belonging.

To be successful in sports requires discipline. Of course, this is true with the arts as well. But with sports, the rules are typically more clearcut and defined.

Sometimes in life, there are specific rules that must be followed to reach certain goals and achieve success. 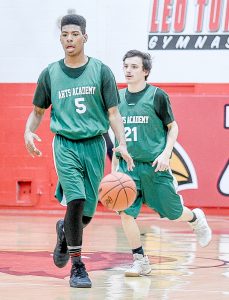 By learning the discipline of following certain rules (and knowing which ones are rules for the sake of rules), a student can more easily reach his or her goals.

Exercise is good for your health. Duh.

Whether your team is winning or losing, you’re going to get a lot of positive encouragement from parents, friends, teachers, and coaches during the game. And beyond.

Playing sports requires the ability to concentrate and focus. But it’s also effective at stress reduction.

All of this is training for the brain that can be carried off the court as well.

Even with all of these great benefits, creating a basketball team from scratch at AAW has been no easy feat.

Early Struggles As a Team

Some of the students had never played organized basketball before and they were suddenly on the court playing in front of an audience of spectators.

But they soon realized it wasn’t about winning. It was about playing the best game they could play. And hopefully improving from there.

Freshman Brayden Belanger has enjoyed playing for the Wildcats. “It’s been a lot of fun,” he said. “We’ve come a long way.”

And junior Kevin Howard, who was active in the early formation of the team, feels it’s bigger than he ever imagined. “I’m actually kind of excited. I didn’t really think it was going to get this far. I’m kind of glad we’re a team.”

“In my opinion, every game’s like a win,” Guay said. “For me, just seeing them leave with smiles, sweat, is really rewarding.”

The Future for the AAW Wildcats

The Wildcats are looking to develop even further. Their goal is to become bigger competitors.

“There’s some serious progress being made. I could see us possibly being competitors in the next few years,” Guay said. “I feel like the talent that we have, with experience, could really turn into something.”

Every day during their playing season, Guay was thrilled to see the ambition, dedication, and drive of the students. They had a dream and they accomplished it.

“It’s really proof of what these kids can accomplish.”

What Are Your Goals?

Even if you’re hoping to be the next Georgia O’Keefe or Pablo Picasso, there’s no rule that says you can’t like or play sports.

Just as there’s no rule that says you’re supposed to enjoy sports or be part of the AAW Wildcats.

At Art Academy in the Woods, you get to choose… without judgment.

So come and see what we have to offer. Contact us today to set up a time to tour the school. We look forward to meeting you!