Home // Art Integrated Education // How AAW Is Different from Other Schools

How AAW Is Different from Other Schools

Are you interested in attending an arts academy middle/high school?

If so, you may have heard of Arts Academy in the Woods and are wondering how AAW is different from other schools.

AAW Senior Rebecca Kahn was recently scheduled to attend a board meeting at the school.

She was disappointed when her work schedule intervened and she was not able to make it. “I was really looking forward to telling the board members how AAW has changed my life,” she said.

So rather than simply bow out, she sent an article about “what makes Arts Academy in the Woods such a great school.”

AAW Is Different from Other Schools

Much of what Rebecca wrote expressed how arts academy middle/high schools like AAW are different from more conventional schools.

And in ways that have had a really positive impact on her life.

She touched upon four ways in particular.

1. The Staff Works to Resolve Conflicts

“In my previous school, the staff acted as if they were blind to the bullying that was happening in their classrooms,” Rebecca wrote.

Unfortunately, that’s an all too common occurrence in public schools where class sizes keep growing and budgets keep getting cut. Teachers are under pressure too and simply don’t have the time to address these issues.

The administration at Rebecca’s school told her multiple times that they were unable to do anything about the different bullying situations to which she’d been exposed. “They had me fill out the occasional conflict sheet,” she wrote. “This was ignored though because the only action that was taken was me leaving the school system.”

Rebecca has found that the social workers at AAW take action.

They talk to students individually and set up conflict resolution. If further action is needed, the vice-principal or even principal may be involved.

“AAW cares about its students’ well-being and comfort at school,” she added. “That’s more than I can say for my previous high school”

In a dream world, no one would judge one another. That’s just not reality though. Especially in middle school and high school.

The years of middle school and high school are fraught with bullying and judging. And those who are considered strange or weird

(often creative types) get the brunt of the abuse.

“I’m not going to lie,” Rebecca wrote, “Arts Academy in the Woods is still a high school.” In other words, it’s not a completely judgment-free zone.

“But the difference between AAW and basically any other high school is that the strange students outweigh the normal students,” Rebecca noted. “Our school’s population is made up of outcasts who didn’t fit in at other schools.”

As a result, there is far less bullying.

Rebecca put it best when she wrote, “The students at AAW understand that we all have our own crap to deal with. While at my previous school, judgment was a culture.

3. There Is Exposure to So Many Different Kinds of Art

Conventional schools that haven’t had their art and music budgets completely stripped (which are becoming fewer and fewer) still offer the basics.

But at an arts academy, the arts are a part of the academics. And vice versa. They use art to teach science, math, history, literature, and social studies, you name it.

That means that students are exposed to a much broader range of art, as well as art genres.

“Since Arts Academy is an art school,” writes Rebecca, “their academics involve different works of art that I wouldn’t have been exposed to if I’d gone to a different school. Also, I probably wouldn’t have discovered my passion for slam poetry – which allows me to express myself in a way I didn’t know was possible.”

“Arts Academy is the reason that I am pursuing law,” she continues. “If I  hadn’t discovered my ability to perform, I wouldn’t be as confident heading into college.”

4. Students Are Encouraged to Discover and Explore

Conventional schools are at the mercy of testing. In order to continue to receive funding, teachers must successfully teach the assigned curriculum and meet the required standards.

In other words, teachers are under stress to stay confined to a rigid structure of expectations. This is not exactly an environment conducive to discovery and exploration.

“When going to AAW,” writes Rebecca, “you’re able to be exposed to different subjects, artists and musicians. You also find different hobbies that you wouldn’t have been exposed to in a normal high school.”

For example, Rebecca has been exposed to different topics and people in her Journalism and Creative Writing classes that she feels she wouldn’t have learned about or met in another school.

She’s also discovered that she likes many more genres of music than she originally thought. She’s able to appreciate so many different 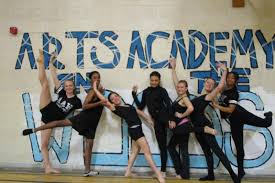 art forms too – including styles of dance she didn’t know existed.

“If it weren’t for AAW, I would probably still be in the dark about a lot of interesting things,” she wrote.

That’s a ringing accolade if we’ve ever heard one. And honestly, we’ve heard more than a few over the years.

AAW Is Different from Other Schools

And that’s a good thing.

Because being an outsider in high school doesn’t exactly render those four years one’s glory days.

As Rebecca mentioned, AAW is different from other schools in that it not only accepts being “strange” or “unusual.” It celebrates it.

So if you’re ready to experience the freedom to be yourself at school, come and take a tour of AAW.

It could just change your life too.