The year 2020 left so many of us feeling powerless and deflated, it’s hard to imagine that artist-activists could have any impact on the current state of this country.

Furthermore, the cutting of funds to the arts in the last four years has hammered in the ill-conceived notion that the arts are not needed.

Nothing could be further from the truth though.

Utilizing the arts in activism is a brilliant way to inform audiences through unfamiliar forms and means. It shakes up preconceived notions and has the ability to bypass political and moral ideals to provide new maps.

Artist-activists can touch and change both hearts and minds. And that puts them in a powerful and important position. 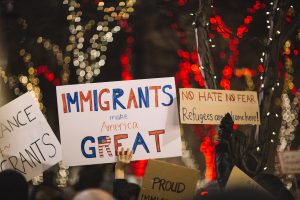 You need only pick up an art history book to see the huge impact the arts have had on activism over the years. It’s only logical though. Artists inherently view the world in a different way.

But they can take their views and broadcast them out into the world in unconventional ways that are farther reaching than those spewed by conventional authority figures at the helm.

More than other educational institutions, art colleges, as well as arts academy high schools and middle schools, emphasize the value of activism and the importance of finding one’s voice to better understand themselves and the world at large.

The following is merely a small sampling of those who (have) found their voices to institute change and shift cultural perspectives through activism.

Carrie Mae Weems is a dynamic artist who explores race, class, and gender in her activist work. One of her most famous photography projects called The Kitchen Table Series. Each piece portrays the moments that occur within domestic interior spaces with a focus on family and gender.

Over the past 30 years, she’s been an unstoppable and moral force with a vast collection of works in video, textile, and spoken word.

In the 1920s, Mexico was staging a revolution against the tyranny of industrialization. Their sole focus was on protecting workers’ rights.

A group of artists dubbed themselves the Mexican Muralists for the Mexican Communist Support. They began painting large scale public pieces depicting the struggles of the proletariat.

Among the best known of these was Diego Rivera. He used traditional painting strategies to communicate their Leninist ideals to the masses.

Europeans in the 1920s were dealing with the ravages of World War I. A group of artists formed a nightclub where they could experiment with political performance art. They also invented collage as an affordable medium in war-torn countries.

As the group grew and evolved, they branched out into sculpture, design, and poetry. Their work was reactionary and unapologetic. Among the most famous Dadaists were Marche Duchamp, Max Ernst, and Hannah Höch.

Among Gordon Parks‘ most famous pieces is his rendition of American Gothic – which takes on the perspective of an African American in Washington D.C.

As one of the first black filmmakers, Parks was pivotal in the development of the“Blaxploitation” film genre. Yet, his most prominent work grew out of documenting civil rights, racial inequality, and poverty in the 1940s-70s.

During this time, he captured haunting images of what it meant to live in the communities that dealt with these issues. And he was a pioneer in the development of social and political photography.

Lawrence, an African American social painter, is well-known for his massive 60-piece painting collection entitled The Migration Series. It centers on the reasons, turmoil, and outcome of the great migration of African-Americans from the South to North Eastern/Central cities during the Jim Crow era. 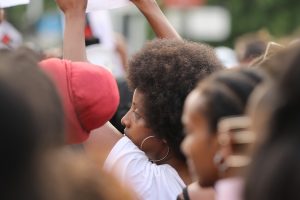 His medium for the series was tempera paint on cardboard or simple wood. Hee depicted the horrendous moments of violence and oppression that occurred in both the South and the North. Yet he also captured a few warmer moments where the human spirit triumphed.

Lawrence would go on to create several more series that targeted social-historical issues.

Located in 1980s New York, a group of artists took on the heady duty of Political Art Documentation and Distribution, or PAD/D.

Their goal was “to provide artists with an organized relationship to society, to demonstrate the political effectiveness of image-making, and to provide a framework within which progressive artists can discuss and develop alternatives to the mainstream art system.”

Anything that combined art and protest was their bag. To achieve these ends, they distributed information, created art for demonstrations, held forums, published newsletters, and participated in protests themselves.

A group of feminist unknown artists, the Guerrilla Girls sprung onto the scene in 1985. They’re still going today.

Disgusted by the lack of recognition and inclusion of women and people of color in the arts, they continue to fight to remedy this. They maintain their anonymity by always wearing gorilla masks and taking on the names of dead female artists in homage to their work.

The group protests, speaks, and performs publicly – often highly critical of large publicly funded institutions and private galleries. Their most recognizable work is the humorous billboards, posters, and flyers they distribute that present shocking statistics regarding inequality.

So be on the lookout!

Do You Wish to Join the Ranks of the Artist-Activists? 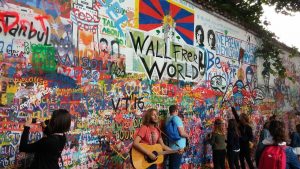 Activism can feel like a foreign concept that requires too much commitment, risk, and/or time.

But the truth is, artist-activists merely recognize that we all have a creative life and that using the arts in activist work lowers barriers and provides opportunities for those otherwise alienated by institutional systems.

If you see a world where your child can use his or her art to some day make a difference, then contact us today to request a tour of our school. We’ll foster that passion and help them achieve that reality.